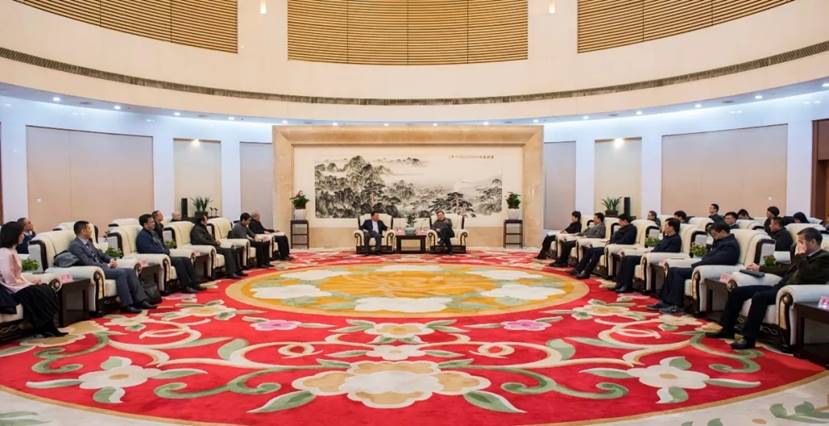 On the afternoon of January 3rd, Hefei High-tech Zone and Dawning Information Industry Co., Ltd. (hereinafter referred to as “Sugon”) signed a project cooperation agreement, and Sugon (Anhui) headquarter base officially settled in Hefei. Before signing the contract, Song Guoquan, member of the Standing Committee of the Provincial Party Committee and Secretary of the Municipal Party Committee, met with the Sugon president Li Jun and his party. Ling Yun, Luo Yunfeng, Wei Yi, Municipal leaders, Luo Ping, Secretary-General of the Municipal Government, and Jiang Haihe, Vice President of Hefei Institute of Physical Science，Chinese Academy of Sciences and others attended the meeting.

At the meeting, Song Guoquan said that Sugon (Anhui) headquarter base was settled in Hefei, which was another great achievements of the cooperation between the two sides. We hope to speed up the project and will do the best services. In the early stage, the project of Hefei Super-computing Center co-operated by both parties is progressing smoothly. It is hoped that the standards of “advanced, practical and distinctive” will continue to be further promoted, and the operation of the super-calculation center could be planned in advance to better serve Hefei comprehensive national science center construction and meet the needs of various research institutes, universities and enterprises in the future.

Li Jun thanked Hefei City for its strong support and he said that Sugon is confident that the Hefei super-computing center will be built into a world-class super-computing center, and ensure its advanced technology and complete functions, and at the same time accelerate Sugon (Anhui) headquarter base construction and make greater contributions for Hefei's innovative development.

It is reported that the Sugon (Anhui) headquarter base project is the regional industrial base and innovation platform for Sugon taking root in the central region. After completion, it will gather more than 300 high-end R&D personnel, forming a revenue scale of over RMB 1 billion per year.